Since crypto markets worldwide have gained tremendous popularity amongst the community users and investors, the market has been a bit volatile at present as the crypto major that leads altcoins has been experiencing downward trends. The following synopsis for the renowned cryptocurrencies will help you evaluate the exact scenario.

Bitcoin, a decentralized digital currency and crypto major, has observed the downward fluctuation trends which can be evaluated from the following analytics. 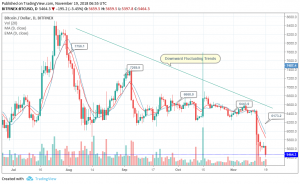 The crypto major who has evolved in the digital revolution has seen many ups and downs since its inception. As we can quickly analyze that it traded at $7756.1 on 1st August 2018 after that, it slashed to $6173.2 on 19th November 2018 by 20.4% approx. The best news for all those that would like to park their capital by investing into this crypto major as this is the right time to buy it now when the BTC/USD pair has slashed and hold it to gain long-term benefits as the prices are low. The BTC/USD pair has slashed (from attaining its position at the peak on 1st August) continuously however below Moving Average until mid-August. The best approach is recommended to wait and watch. Let us not forget that the crypto major – Bitcoin is already holding its position on the top in terms of market cap as per the CoinMarketCap.

Ripple, a real-time gross settlement system, currency exchange and remittance network created by Ripple Labs Inc. has started gaining momentum from 1st October where it traded at $0.53117, and then eventually it reached to the level of $0.51590, slightly 2.87% down compared to 1st October price. 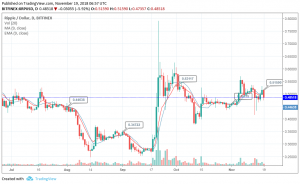 The XRP/USD pair started to bounce back from 1st November while trading $0.46115 slightly above the moving average trend line. Needless to say that Ripple has already surpassed the second largest crypto coin – Ethereum recently and is ranked second in terms of market cap as per the CoinMarketCap. Based on the analytics described above, one can expect the upwards moments of Ripple soon. 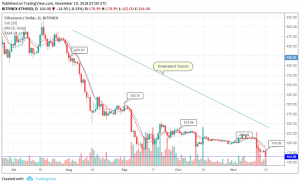 The erstwhile second largest cryptocurrency, ETH/USD has experienced downward moments, of course, it may follow the footsteps of Bitcoin and other altcoins in the market. The ETH/USD pair slashed from 1st August when it was at $420.03, after that it has seen downward pressure either from competitors or macro fundamentals until it reached to $178.89 as on 19th November 2018. Though ETH/USD slightly below or in line with moving average. Ethereum is ranked third in terms of market cap as per the CoinMarketCap. One can quickly estimate that the downward pressure is due to excess selling as well as competitive forces in the market. However, those who love this crypto, this is the right time to buy it and hold it for quite some time due to the lower price in place.

Bitcoin Cash, the fourth largest cryptocurrency (in terms of market cap) as per the CoinMarketCap, is supposedly seen its downward pressure from the end of July. 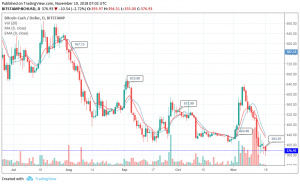 The BCH/USD traded at $767.13 on 1st August, then slashed until mid of August, and then started gaining its momentum and reached at $633 on 1st September and eventually, it declined until it reached $393.97 as on 19th November which can be seen from the analytics described above. Let us not forget that this crypto-currency has been above the moving average trends whenever it soars high, for example, the pair traded at the level of 1st September, 1st October 2018. The name itself is the reminiscence of the crypto major – Bitcoin that may expect to give it a particular advantage. Anyway, the best approach again for this crypto is to wait and watch for those who have already invested.

One of the renowned cryptocurrencies, EOS is ranked six in terms of market cap as per the CoinMarketCap. 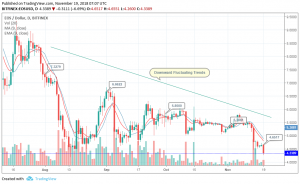 The EOS/USD paid had slashed from 1st August when it was traded at $7.3279 however below the moving average. Thereafter, it declined and started soaring on 1st September above moving average especially when it was sold at $6.6622. Needless to say that the entire scenario which can be observed from the aforesaid analytics where eventually this cryptocurrency reached the level when it traded at $4.6517 as on 19th November 2018. From the aforesaid graph, one can easily judge that besides having downward pressure on the value of this currency, it soared high and achieved a certain milestone when it traded on 1st September, late of September, and mid-November.

Litecoin is a peer-to-peer cryptocurrency and open source software project released under the MIT/X11 license. This cryptocurrency is ranked seven in terms of market cap by CoinMarketCap. 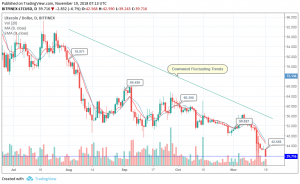 The LTC/USD pair experienced fluctuating downward trends till date. The LTC/USD traded at the peak especially after mid-July, and while attaining at the level of $78.971 on 1st August however below the moving average, it slashed and then started gaining at the peak at the level of $66.499 on 1st September. It has seen downward pressure due to the pricing pressure from competitors, volatile market, and of course the macro fundamentals that run both –capital market and crypto market. The best part of the aforesaid analytics is that on 1st September, 1st October the price was above the moving average that clearly showed that the pair had an uptrend in the market.

Tether, one of the cryptocurrency with tokens issued by Tether Limited, which claims that each token issued is backed by one United States dollar though they may not necessarily be redeemed through the Tether platform 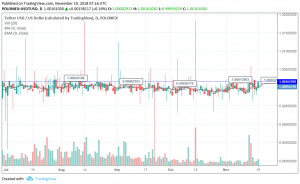 Tether is said to be eight ranks in terms of market cap by CoinMarketCap. The cryptocurrency has been in line with moving average where the highest traded price was at $1.00056198 on 1st October and $1.0002 at on 19th November 2018. Almost all the time this cryptocurrency traded below its threshold which can be seen from the aforesaid analytics.

Cardano, a distributed computing platform that runs the blockchain for the Ada cryptocurrency and ranked nine by CoinMarketCap in terms of market cap. 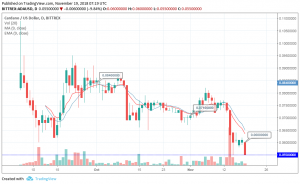 The hilarious part of the ADA/USD pair which can be observed from the aforesaid analytics, where it touched at the peak $0.08400000 on 1st October and then slashed until it reached to $0.07100000 on 1st November and eventually at down to $0.06000000 as on 19th November 2018. The pair constantly experienced downward pressure on its value due to the competitive forces and volatility in the market. The best strategy is to observe the level of the pair and wait until it starts roaring. Needless to say that in the late of September 2018, it experienced a tremendous peak level however above the moving average which can be observed from the aforesaid analytics.

Monero, an open-source cryptocurrency created in April 2014 that focuses on fungibility, privacy, and decentralization and ranked tenth by CoinMarketCap in terms market cap. 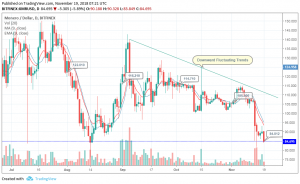 The XMR/USD pair was at the highest in mid of July which was above the moving average. Thereafter it slashed till mid of August and then started gaining momentum while reaching again at the second highest at $116.210 on 1st September above the moving average trend line. While attaining its second highest position in the last one quarter, it started declining constantly and eventually reached at the level of $84.812 as on 19th November 2018. The paid has experienced downward fluctuating trends from September to date. However, based on the recent quarter volatile price moments, once can expect this currency may slightly go up in the days to come.

Tron, the eleventh rank in terms of market cap by CoinMarketCap has seen downward pressure moment likewise other altcoins which can be well observed from the following analytics. 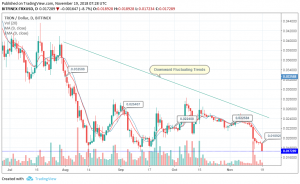 When TRX/USD traded at the highest peak in late July, it significantly slashed at the level of $0.032588 as on 1st August and then experienced a downward moment till mid of August. Thereafter it started gaining momentum and reached at the level of $0.025407 as on 1st September however above moving average and continuously experience volatile price moments due to the competitive forces in the market. It finally reached and traded at $0.0189 as on 19th November 2018.

Dash, an open source cryptocurrency and is a form of a decentralized autonomous organization run by a subset of users, called “master nodes” has seen a wide fluctuating trend since late of July till date. 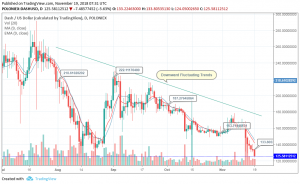 The DASH/USD pair experienced downtrends since late July when it traded below moving average. The lowest trend observed in the late of August and thereafter it started gaining upward moment and reached at the level of $222.11176400 as on 1st September and gradually slashed until it reached at $187.2764 on 1st October and eventually significant declined at the level where it traded at $133.805 as on 19th November which can be observed from the aforesaid analytics. The cryptocurrency has ranked thirteen in terms of market cap by CoinMarketCap.

Let us not forget that either crypto market or capital market, they are highly volatile as besides micro factors, the macro fundamentals that cause the scenario volatile for quite some time. All those that are poised to invest into the crypto market at the cheaper rate and would like to hold the portfolio for a longer period of time, the downward pressure is proved to be an advantageous one. However, those who have already invested in the crypto portfolio and would like to gain momentum, are recommended to wait and watch approach until specific correction can be seen or else the volatile market decelerate its speed!!